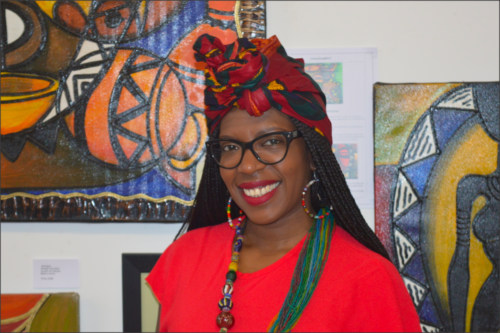 Gallerist Jennifer Akinsuyi shares the unusual turn of events that led to her decision to switch careers and become an importer, agent and exhibitor of African art; a vocation which involves constant international travel as she sources talent. Although she has a degree in computers and financial services management as well as a masters in research, after years working in computing she sought new avenues exploring art and culture. She recognises the research and analytical areas of her former profession will prove useful in this one.

And all of this was triggered during a trip to Monaco three years ago where she saw some ‘amazing and beautiful’ art at an exhibition. A conversation with a colleague about contemporary African art set her off into research-mode and she soon became aware of a wide new world of paintings and sculpture, rich in culture and creation. Jennifer then travelled to her homeland of Nigeria with the intent of hooking up with artists and sellers. She was, in her own words, blown away by the talent she saw there.

The budding gallerist bought some paintings and these first imports became her tentative steps into this fiercely competitive field. “I took the art to an auction house and the first week it didn’t sell so the auctioneers contacted me to collect it. But I replied ‘Oh come on guys give it another week.’ They did so and later someone bought all the work. It wasn’t a massive amount of money but it told me there was a potential market out there.”

With further market research rubber-stamped, JonaQuest Arts officially opened in March of 2016. She chose Greenwich as her location for several reasons: “We had a successful African pop-up event here in 2015 and people were excited, they were looking through the door, there was music playing and African food being served. It attracted many curious buyers, so I saw firsthand that Greenwich was an area that was open to contemporary African art. The pop-up was only initially for a week but I thought ‘why not give it a shot’.”

Talking further about the gallery’s popularity she recalls: “We had a Haitian Art exhibition which was very memorable because prior to this I had an art exhibition in Maidstone and someone bought one of my pieces. On the night of the Haitian Art preview, he just happened to be eating in a restaurant opposite. He made it clear he recognised me, was invited to join the preview and later bought another piece worth £1,400.”

Now trading for almost a year, she recognises the work involved in marketing to the public as well as specialist buyers. “It has been going well. Whether I like it or not, art is seen as a luxury but I want everyday people to have access to my art.” And her plans for the future? “ I plan to continue to showcase art from the diaspora and work with new artists. Not just African, but talented artists from all over the world.” 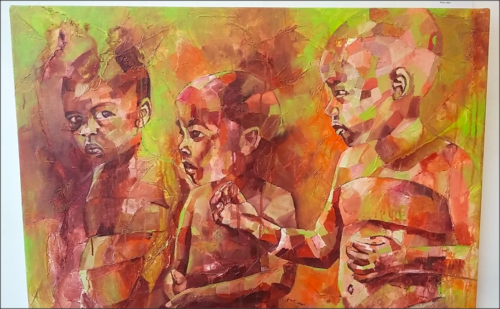