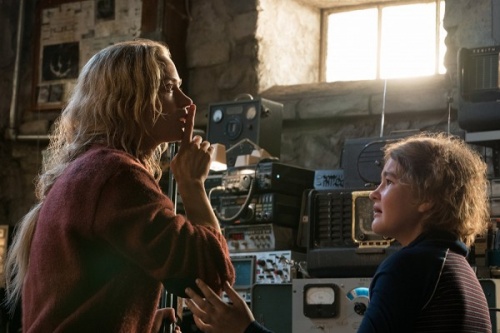 Review of: A Quiet Place (Film)

A QUIET PLACE is a pretty quiet film. In fact, after a couple of scenes, you’ll get the impression you are watching a silent movie. The characters rarely speak so as to prolong their survival in an environment where blind reptilian extraterrestrials hunt down anything they can hear. Their lack of sight evens up the battle a little for this family of four, including two young children, who are scared out of their wits but not allowed to scream. They are forced to communicate in sign language.

Actor-turned-director John Krasinski stars as Lee Abbott alongside his real wife Emily Blunt, and is also one of the writers, so has heavily invested in this screenplay by Bryan Woods and Scott Beck. Both these writers admit to being influenced by silent film, while Krasinski used his directorial prerogative to make it a quiet film with one or two words spoken here and there. The first-time director has put heart and soul into this project, examining the genres and from this scholarly attention to the existing film grammar comes a high concept, slow-moving and curiously absorbing movie which is so graceful and poetic in the early scenes you get the sense that there is a slight slow-mo going on, subtle enough to redirect your impressions about the atmosphere of horror and sci-fi. But that early pace soon makes way for the galloping rhythm of terror and survival once these creatures track them down.

And the monsters are believable. There is s cinematic graveyard full of promising horror movies that start off full of eventful suspense that does its job in keeping you on the edge of your seat, only for a less than convincing creature to emerge to kill your suspension of disbelief. Brit horror movie Creep (2004) comes to mind as an initially Hitchcockian suspense movie let down by an ‘unconvincing monster moment’. So it’s great to hear that director John Krasinski changed his mind about the look of the creature at the very last minute during post-production because of these concerns. It proved a wise decision. Also, the pace at which it is revealed in the early scenes – a limb here or there stomping on an unfortunate victim or a spine-chilling growl from the woods – is subtle and unnerving. And you’re not disappointed with the final slimy, hideous, snarling result despite the high stakes set by predecessors such as Alien.

The creature’s bat-like reliance on sound gives scope to use film score and sound effects effectively to grate up the tension. The slightest noise is reason to panic as these creatures can hear a pin drop miles away. Domestic accidents such as knocking over utensils which would normally be little cause for concern will make you the prime target for a murky end. Even Monopoly board pieces have to be cushioned with foam. At least it keeps the kids quiet; that is, until there’s a newborn on the way who won’t want to follow these rules. This opens up all sorts of unavoidable consequences unless the parents think ahead about the survival of their brood. The primal drive to protect your offspring makes this movie uncomfortably relatable.

However, it’s the children who come up trumps in the end as they are forced to come of age early under constant threat of attack. Their deaf daughter Regan (Millicent Simmons), becomes a very young shoulder of support during the harshest times, overcoming guilty conflicts with her parents. The director has you thinking he is steering the characters by age and gender in traditional directions before showing how the darkest moments bring out hidden qualities which they may never have shown had the challenges not arisen.

What’s Hot London? magazine is available in print, online and as digital download from Magzter

Tagged with:     A Quiet Place