Home  /  Features  /  Artificial Intelligence and the Changing Shape of Creativity

Artificial Intelligence and the Changing Shape of Creativity 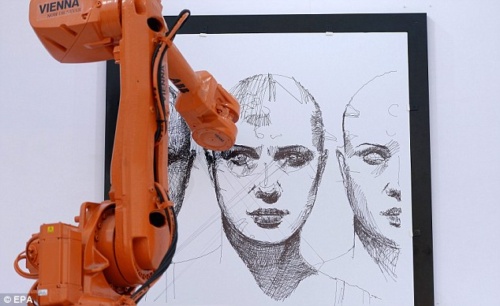 AS SCIENTISTS and researchers fine-tune A.I technology capable of doing the most sophisticated tasks, the general perception is that not only will they be assigned the mundane stuff that we’d gladly delegate to our steel and wire buddies but eventually even our own jobs. Indeed, politicians and social commentators believe this has already started to happen.

It’s one thing to increasingly fine-tune their ability to do more complicated tasks but what about imagination? Arguably, the development of imagination, linked as it is to sentient consciousness, does not come down to any amount of fine-tuning. Well if imagination (and, yes, even consciousness) can somehow be dummed down to the algorithms of neural networks then machines will one day learn to imitate these neural networks. And ‘one day’ is today.

Technology expert and author Robin Sloan recently addressed this issue at the Real Future Fair, Oakland, California, showcasing an A.I he had programmed to write the introduction to a dystopian science fiction novel. This was achieved by getting it to imitate human writing by feeding it hundreds of science fiction magazines from the 1960s.

Not impressed? Well in March 2017 a Japanese novel written by artificial intelligence made the shortlist of the third Nikkei Hoshi Shinichi Literary Award. It’s programmer, A.I researcher Hitoshi Matsubara from Future University Hakodate, claims it wasn’t the only book to fool the judges because 10 others that were partially written by non-humans did so too. It has a pretty unoriginal and obvious title though – The Day A Computer Writes A Novel. It’s amazing the judges didn’t see the warning signs.

Also Benjamin, an A.I created by New York University AI researcher Ross Godwin and filmmaker Oscar Sharp, became the world’s first artificially intelligent screenwriter. It was exposed to the likes of Blade Runner and Star Trek and programmed to analyse their story structures with the intention of producing its own screenplay called Sunspring. OK, the script was a gobbledygook mess but for the follow up movie It’s No Game they recruited David Hasselhoff as the lead actor and all of his dialogue was written by Benjamin. By the way, it’s about an A.I that writes a script for Hassellhoff during a Hollywood screenwriters strike. The irony’s not lost on a creative industry that may well one day take industrial action to oppose Oscar-winning scripts produced by computers.

The abstract realms of contemporary painting could be considered fertile ground for the rambling, less refined, nature of primitive A.I. But, surprisingly enough, not exclusively abstract art. Computers have no problem copying complex aesthetic designs – Renaissance? Romanticism? No problem. One such computer programme has already copied Rembrandt’s style to reproduce new versions of his work. But beyond imitation, researchers from Rutgers University, College of Charleston, in partnership with Facebook’s AI Research Lab have programmed one to produce totally original art. Their A.I was fed 81,449 paintings across the 15th-20th centuries – 1000 artists in total. From this it produced art that was not only original, but which experts could not distinguish as different from the human hand.

As regards A.I poetry, computer scientists, working with Stanford University and University of Massachusetts researchers have come up with this effort below.

Rest assured, Byron and Shelley won’t be turning in their graves at the thought of this clunky competition. But who knows what the future holds.