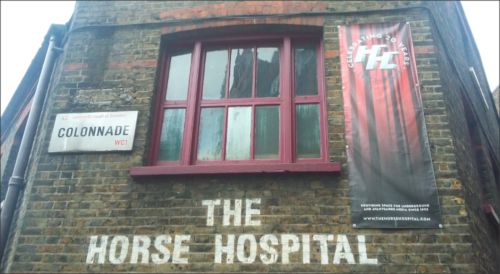 A weird name for a London arts venue and a hub for even weirder creative ideas – the type that are more likely to be rejected by traditional exhibition spaces – but the Horse Hospital has a ‘stable’ enough footing amongst the capital’s artistic community (if you forgive the pun). This Bloomsbury venue holds book launches, performance art, avant-garde media and underground film screenings and does so with little respect for the confines of mainstream thought.

The first thing you’ll notice about this Grade II listed building is that it is still essentially a horse stable with the same ramps fitted to stop the animals from slipping as they enter. But these original features, including the iron tethering rings and 19th Century stone-tiled floors are merely quaint museum pieces which give character and history to the place. The building was redeveloped in the late 1800s and the arts centre launched in 1993. It’s founder Roger Burton laid the foundation for future anti-establishment weirdness by opening with Vivienne Westwood’s Vive Le Punk exhibition of designs.

His namesake James Burton originally built it back in 1797 as a stop-off stable for cab drivers with sick horses and if he were alive today would probably balk at the idea of ‘unbridled’ creativity within those walls (another pun). Anyway those hardwood slats on the horse ramp will come in handy should any prospective launch descend into drunken celebration where revellers require sure footing on their way in and out.