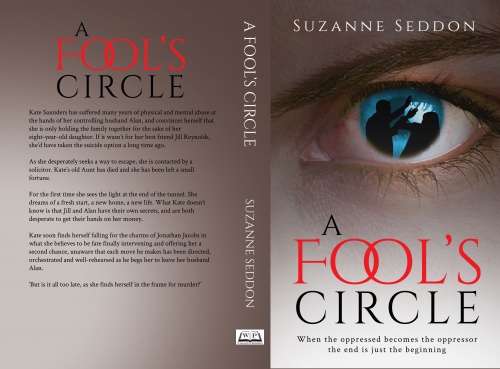 Islington resident Suzanne Seddon’s debut novel deals with harrowing tales of domestic abuse. This fast-paced thriller also packs in high-octane, crime genre plot elements and in doing so reaches out to a readership who appreciate the more gritty, realistic read. She is a single mum who devoted all her free hours to writing this book about the mentally and physically abused Kate Sanders, while dealing with other painful life issues of her own, which failed to throw her off her creative mission. Eddie Saint-Jean interviews her about the journey to complete her first novel and plans for the future.

You’re no doubt elated that all the hard work that went into writing your debut novel A Fool’s Circle is paying off and lots of positive reviews are coming in. What inspired you to write it and how long did it take?

Growing up in a dysfunctional family, I witnessed a lot of domestic violence and mental abuse. Topics like this were never really spoken about and it wasn’t until I got older and attended a well-known drama class in Islington called The Anna Scher Theatre that I had the idea for A Fool’s Circle, writing it as a gritty, no holds barred short play.

Raising my young daughter and being my father’s full-time carer, my time was restricted. However, undeterred, I knew I needed to develop the play into a film. What started out as a short film script soon turned into a full-length feature film script. I could see the characters come to life as soon as I opened my laptop. The harrowing storyline and the honesty of it excited me, and I was now desperate to get a trailer made for the project.

The only problem was I was a skint single mother from Islington. But determined, I wasn’t going to let a little thing like that stop me! I contacted actor friends of mine, as well as sound technicians, and managed to get a camera crew in place. I had Islington Council loan me their offices, whilst my local Sainsbury’s and Tesco’s sponsored the four-day shoot and fed the cast and crew. I also secured other shoot locations for the trailer. Then everything came crashing down.

My mother went into hospital for an operation whilst the trailer was in editing. She never got to see it finished as due to severe complications, she remained in the hospital for two years before passing away in 2016. I was absolutely devastated. My health also took a dramatic turn for the worse. It took me ages to watch the finished trailer but I drew strength that my mother was so proud I had achieved what I had set out to do. I knew from that day, there would be no possible way I would be able to go ahead and film a full feature film. I was a single mother with no support network and I was in a very dark place.

Through my grief I decided, as a tribute to my mother, I would now take this script and turn it into a book. For those writers out there, they know only too well that script writing and writing a book are two completely different things. But once again, I was determined I was going to do this. I completed my first draft in 2017 and after a lot of re-writing, it was finally finished in August 2018.

The book will be launched on what would’ve been my mother’s 74th birthday, March 17th 2019 for friends and bloggers but the official launch will be July 2019. Apart from having my daughter, writing this book is one of the best things I have ever done in my life. Knowing I did it for my mum and that I was completing her lifelong dream makes it even more special.

Did you have any experience in creative writing before embarking on such a large-scale task? When, where and how did you learn your writing craft?

I had no experience in creative writing. I knew I enjoyed writing scripts which I showed to a friend of mine who is an author. He basically gave me so much advice. I was completely overwhelmed by all of it and there were times I wanted to give up. But I’m so glad I persevered and finished it.

Are there any favourite writers who inspired you to put pen to paper?

I love reading and I enjoy lots of different writers for different reasons. But my favourites who inspire me are probably Martina Cole, Patricia Cornwall, James Patterson and Stephen King.

Are any of the characters or plots in the book taken from, or similar to, those in your real life?

Definitely! A lot of the book, even though it’s classed as fiction, has been taken from my own life. I think that’s why people can identify with it so much. I certainly haven’t sugarcoated it! Some of the characters are also based on people I know. Although I’m not going to name them.

What were the highs and lows in your creative journey as regards writing this particular book?

The highs were that every time I opened my laptop up. I could see the characters and even hear them. They sort of led me on this journey. I was over the moon when I finished my first draft. The lows were not having enough time to write. I could only manage this when my daughter was at school. But being a single parent, I also had another million and one things to do during the day. So, I use to stay up all night writing when it was quiet.

Was you surprised by how well received it was by the public and critics alike or did you always have faith it would strike a chord with the man and woman in the street?

I’m absolutely delighted on how well the book is being received at the moment. It’s had so many five-star reviews! I think a thriller mixed with lots of twists and turns along with the (autobiographical) abuse keeps it very believable and makes for a suspenseful story that the man or woman in the street can definitely identify with.

What are your near future and further future plans. Are you planning a book launch or anything?

I think I would like to write another book. But I would really like A Fool’s Circle to made into a feature film or a 4-6-part TV adaptation. I think it has excellent potential and would make for great viewing. Keeping my fingers crossed (hard) I get a phone call soon. Ha! ha! I’m told by my publisher that a book launch is planned for July and there are also plans to enter the book in book festivals. So, I’m looking forward to the future.

A Fool’s Circle is published by Wallace Publishing.