A Cure For Wellness (Film) 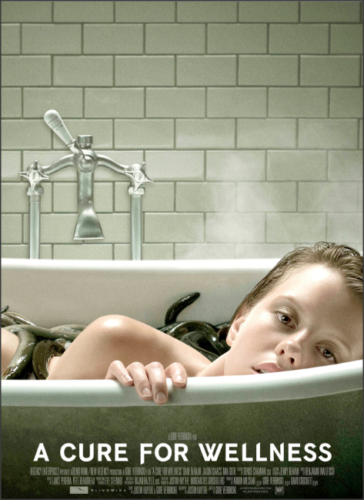 Review of: A Cure for Wellness (Film)

It’s certainly one of the strangest films you’ll see this year and will make you think twice about booking a weekend spa getaway at a stately gothic retreat in the Swiss Alps (as you do!).

This genre-bridging sci-fi, psychological thriller-horror will also have you scratching your head long after you exit the cinema and fill you with a pretty reasonable but nonetheless morbid fear of being locked away with bloodsucking eels in an airtight water tank. Phew! And don’t expect any get well soon cards from the boss any time soon because once you enter no one ever leaves and no one will come looking for you.

Dane DeHaan looks suitably pale and sickly as Lockhart the Wall Street rookie sent to this sanatorium to locate his CEO, Roland Pembroke who has gone AWOL during a stay which started out as a few days away and now seems permanent. Perhaps his stiff, no-nonsense bosses can see the dual benefits in not only getting Pembroke back to sign off company papers but also putting colour in Lockhart’s cheeks.

Lockhart looks like a coffin-job even before they force this wellness proposal upon him. The saturated, icy blue look of the scene accentuates not only this appearance but also anticipates the clinical, sterile atmosphere that awaits him at a sanatorium whose residents and staff have the opiated and indoctrinated manner of the villagers in The Wicker Man, albeit brandishing syringes and wearing white medical smocks instead of pitchforks and torches.

Any mention of Swiss Alps will conjure up the ubiquitous sweeping cinematography, winding up through quaint cobbled villages and you’re not disappointed in this department. The bowie knife brandishing locals seem decidedly un-Swiss but fit the narrative which at this early stage is refreshing enough. Surreal and experimental, with an eerie lullaby-like film score hinting the unsettling events which lie ahead.

It’s the vacant look in the eyes of the convalescing ‘patients’ and their anodyne tones which tell you this plucky young man is not going to leave once he enters. Even though those Colgate-smiles that greet him seem harmless and disarming, the woman walking barefoot along the gothic rooftops as if attempting suicide and the crazed deer that throws itself across his windscreen suggest otherwise. He should have seen the signs much earlier, especially when from a distance the place looks like Frankenstein’s castle set in the Swiss Alps. Not the most inviting of convalescent retreats despite the wellness sign.

The similarly pale and sickly Hannah (Mia Goth) is central to the plot in a labyrinthine way which harks back to the 19th century and the deranged baron who owned the castle as it was then and married his sister – who looks a lot like Hannah. Mia Goth’s resemblance to Sissy Spacek from the eponymous Carrie (1976) helps the horror elements but doesn’t do the same for the plot in a movie that starts out challenging every genre going but fails to deliver that crucial element that makes a B-movie a classic.

There are many undeveloped areas – some significant some minor but all contributory. Perhps those eels in tanks you are constantly shown indicate some great medical revelation or alternatively some gruesome medieval horror or torture. But no, not much really. And can Lockhart really survive a tube being shoved down his throat (literally) and a container of eels emptied into his stomach? Don’t think so. But he does.

This is where it loses it a little and rejoices in a B-movie fanfare (including the final torching of the castle) which is proud of its parody. Still worthy of a cinema visit and will be amongst the flicks that has you reaching for a DVD re-run till the end of the year at least.