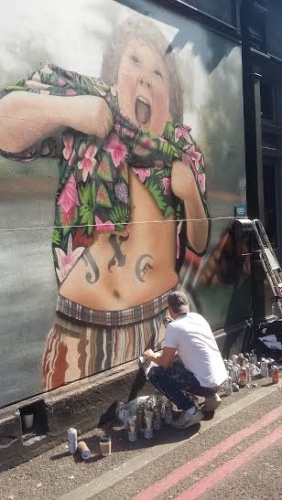 So where is the hottest graffiti in the capital? Quite simply in London’s East End! Brick Lane is best known for the colourful visuals found along the side walls of many Indian restaurants with more artwork crawling up the backstreets. Also in Bethnal Green you’ll find Hackney Road has become an important hub for street artists while Hackney Wick is a trendy base for art studios so one would naturally expect it to attract this art form. Old Ford Lock on Fish Island isn’t too far from the studio centre so impressive work can be found here. You still want more? If you’re still in the East try Shoreditch where Old Street, Redchurch Street and Rivington Street brings out the best in the most daring street art talent. Here you’ll find entire building walls used as brickwork canvases for their masterpieces.

Beyond the East End North London has cool Camden which simply cannot be ignored nor can  South East London’s makeshift skate park at South Bank, a bonafide tourist attraction which rattles with activity everyday. The graffiti’d walls a fitting urban backdrop for the skaters. Deeper south there is Stockwell Park Estate. The graffiti space on its sunken ball courts is comparatively small but the quality is excellent. Here as elsewhere the work is prolific so don’t expect to see your favourite spray can painting still there a week later. So get yourself out and about East, West, North and South and you just might bag a Banksy! But getting it home is another matter unless you’ve got a concrete cutter handy.