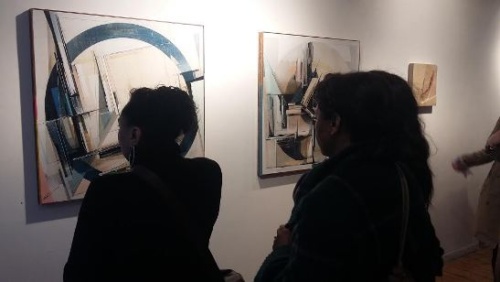 So the group exhibition is called Exceptional. As adjectives go it’s certainly neither humble nor self-deprecating and sets an expectation of awe-inspiring talent. But hey if Sensation worked for Damien Hirst and the Young British Artists back in 1997 then who’s to say…

No sharks suspended in vats of formaldehyde but the tenets of abstraction at this Scream London Gallery are fluid enough, and they need to be if bringing together these divergent takes on craftsmanship and expression. Artist Steve More’s White Syntax paintings (iii, vii and viii) are easy on the eye and one can imagine them adorning an upmarket flat with pride of place on a similarly white-washed wall. The faintest hint of expressionist brushstrokes enough to mark him out as using minimalism to underscore elements of the universal psyche. But is he an expressionist? The art world loves labels but artists hate them. The greatest artists went to their graves with art critics telling them who they were and stifling them out of their own debate. That century old debate over whether Van Gogh was an expressionist, post impressionist, early Fauve or all three, typical of how difficult such definitions can be.

And if we’re still dealing with such labels, out of all the Exceptional artists Charley Peters is about as close as you’ll get to a modern-day Fauve. He’s very matter-of-fact about his processes as shown by his untitled Line/Space/Colour/Study and doesn’t have the unbridled rage of the original Fauves. What he does share is their attention to detail when using vibrant colour to express the relationship between light and space. Unashamed colour is the end-game when a traffic-light coloured squiggle of red, yellow and green streaks a similarly hued canvas. Uncompromising and bright.

Augustine Kofie’s work takes on the precision of a draughtsman and the titles are an ironic nod in that direction. The succinctly named Assembly Instructions typical of this, and certainly doesn’t look like it’s been put together using found paper, ball point pen and spray paint on birch panel. Not with such a pronounced geometric quality and flawless workmanship. You can almost imagine him having an old-fashioned metal ruler, compass and protractor in his kit bag to ensure that the relationship between lines and space is an unequivocal one.

Jerry Inscoe tells you he’s dissected a Russian Birch and you’d better believe him. His Ascendance series of sculptures, hang like paintings and blur the lines between the two methods. Each one gouged and marked with uneasy intent and you’ll not fail to pick up on a sense of interruption here. And just like that they are delivered for debate. A debate which should start ‘are they beautiful, ugly, unfinished…or all three’.

The Exceptional Group Exhibition is at the Scream London Gallery, Eastcastle Street, Fitzrovia, London until May 20th 2016.